A recent CBS News poll shows support for legalizing marijuana is higher than ever.

Sixty-one percent of Americans think marijuana use should be legal, a five-point increase from last year and the highest percentage ever recorded in this poll. Eighty-eight percent favor medical marijuana use.

Seventy-one percent oppose the federal government’s efforts to stop marijuana sales and its use in states that have legalized it, including opposition from most Republicans, Democrats, and independents.

More generally on the topic of drug abuse, 69 percent think that should be treated as an addiction and mental health problem rather than a criminal offense.

Marijuana legalization support over the years 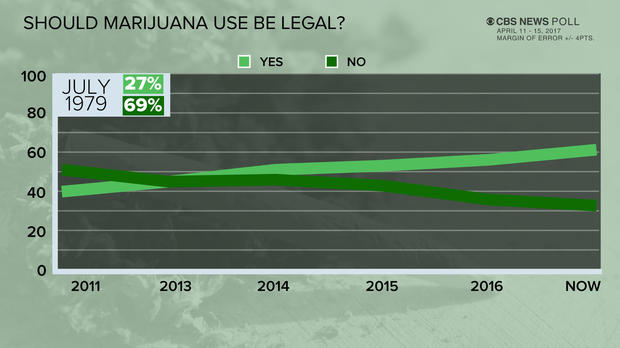 The belief that pot should be legal has reached a new high in CBS News polls.  Sixty-one percent of Americans now say the it should be, a five-point increase from a year ago.  This sentiment has increased each year we’ve measured it since 2013, with the turning point to majority support coming in 2014. Back in 1979, this poll found just 27 percent saying it should be legal.
Those over 65 are the most opposed to legalization, but most under age 65 support it. And women are now as much in favor of legal marijuana as men are; in previous years they were less so.

This sentiment cuts across party lines:  Majorities of Republicans (63 percent), Democrats (76 percent), and independents (72 percent) oppose the federal government trying to stop marijuana use in these states.
Attorney General Jeff Sessions has asserted a connection between marijuana and violent crime, but few Americans see it that way:  just 23 percent think legalizing pot increases violent crime, while nearly as many think legal marijuana decreases it.

Marijuana compared to alcohol and other drugs

Generally, most Americans think habitual drug use should be treated as an addiction problem rather than a criminal offense.  Even most Americans who oppose legalizing marijuana think so.  Majorities of Republicans, Democrats, and independents all agree.

Most Americans view marijuana in particular as safer than alcohol.

And most Americans also think marijuana is less dangerous than most other drugs, particularly those who say they have tried it.

There continues to be wide support for allowing doctors to prescribe small amounts of marijuana for patients suffering from serious illnesses:  88 percent of Americans think this should be allowed – similar to a year ago.  Even most Americans who oppose legalizing marijuana in general think medical marijuana use should be allowed.

Who supports it, and who’s tried it?

Support for legalization has risen among all age groups – particularly those under 55.  Americans under 35 show the strongest support.  Three in four adults between 18 and 34 support legal marijuana use, as do six in 10 Americans between 35 and 64.  Seniors remain the one age group for whom a majority still think marijuana use should be against the law.

There are partisan differences.  Most Democrats and independents increasingly think marijuana use should be legal, while Republicans are divided.

The percentage of Americans who say they have personally tried marijuana has risen over the past twenty years.  Now half of Americans say they have tried it, similar to a year ago, though up from a third who said they did in 1997.

This poll was conducted by telephone April 11-15, 2017 among a random sample of 1,011 adults nationwide.  Data collection was conducted on behalf of CBS News by SSRS of Media, PA.  Phone numbers were dialed from samples of both standard land-line and cell phones.

The poll employed a random digit dial methodology. For the landline sample, a respondent was randomly selected from all adults in the household. For the cell sample, interviews were conducted with the person who answered the phone.

Interviews were conducted in English and Spanish using live interviewers. The data have been weighted to reflect U.S. Census figures on demographic variables.

The error due to sampling for results based on the entire sample could be plus or minus four percentage points. The error for subgroups may be higher and is available by request. The margin of error includes the effects of standard weighting procedures which enlarge sampling error slightly.
This poll release conforms to the Standards of Disclosure of the National Council on Public Polls.

CBD Oil as an alternative:

CBD is a Natural pain relief and anti-inflammatory. People commonly use prescription or over-the-counter drugs to relieve pain and stiffness, including chronic pain, but CBD Oil offers a more natural way to lower your pain. Researchers believe the non-psychoactive compounds in marijuana, including CBD, could be a new treatment for chronic pain. Those of us who live with Chronic Pain know how effective it is in relieving pain without all the negative side effects. CBD is presently used for some conditions that cause chronic pain, like multiple sclerosis and fibromyalgia. CBD Oil Will it help you? What is it?

What’s the Differences Between Hemp and Marijuana

CAUTION!! If you have a job or other circumstance that requires you to drug test use CBD Oil with little to no THC! THC will show on a drug test. This CBD Oil however, contains very low THC!! This makes it the perfect choice for those who want to give it try to see if it’s healing benefits work for them (I’ve never had anyone that did not see positive benefits), without the risk of showing positive for Marijuana on a drug screen.

For more Information or to purchase CBD Oil go HERE